Refractory acquired thrombotic thrombocytopenic purpura is a life-threatening disorder. N-acetylcysteine (NAC) rapidly degrades ultra-large vWF multimers by disrupting the disulfide bonds. We provide further evidence of a successful use of NAC with a novel dosage for acute illness and preventive treatment.

Acquired thrombotic thrombocytopenic purpura (TTP) is an acute microangiopathic thrombotic disease affecting many organs and characterized by the presence of haemolytic anaemia, severe thrombocytopenia, neurologic abnormalities and organ failure. The pathogenesis is a deficiency in the plasma metalloprotease ADAMTS 13 (a disintegrin and metalloprotease with thrombospondin type 1 motif, member 13) which cleaves the prothrombotic ultra-large von Willebrand factor (vWF) multimers [1,2] due to the appearance of anti-ADAMTS 13 autoantibodies [3]. As a consequence, platelets bind to these ultra-large vWF multimers forming aggregates that consume platelets and cause widespread microvascular thrombosis and subsequent tissue infarction. Diagnosis requires both clinical (neurologic symptoms) and biological criteria, including haemolytic anaemia, severe thrombocytopenia and deficiency of ADAMTS 13 (activity <10%) [4].

TTP may occur in association with malignancy, pregnancy, drugs, HIV infection, inflammatory or autoimmune diseases, requiring specific treatment [5]. However, the standard treatment of TTP consists of empirical therapeutic plasma exchange allowing to ADAMTS 13 repletion and removal of anti-ADAMTS 13 autoantibodies [6]. Steroids are also commonly used in combination with plasma exchange, given the autoimmune origin of acquired TTP.

TTP is a life-threatening disorder. Until the 1990s its outcome was fatal in 90% of cases [7]. Nowadays, despite the introduction of plasma exchange and steroids, mortality rates remain between 10 and 20% [6].  Moreover, relapses have been described during steroid treatment [8]. Therefore, rituximab has been incorporated as routine therapy, in association with plasma exchange and steroids, for patients with suboptimal response to treatment and for most aggressive cases [9, 10]. Older age, increased troponin levels (> 0.25 ng/mL) [11] and a very high lactate dehydrogenase (LDH) level have been associated with treatment refractoriness and death [12].

Refractory acquired TTP is defined as an absence of platelet count doubling from baseline after 4 days of standard treatment with plasma exchange and immunosuppression (typically, steroids and rituximab) [5] . Refractory TTP constitutes a therapeutic challenge and there is no consensus concerning its management [7]. Several strategies have been implemented, including twice-daily plasma exchanges, splenectomy or other immunosuppressors such as cyclophosphamide, cyclosporine A or vincristine. New agents under evaluation are bortezomib, caplacizumab, recombinant ADAMTS13 or N-acetylcysteine (NAC) [5, 9].

An unconscious Moroccan 55-year-old male was hospitalized with a Glasgow Coma Scale of 9, after four days of headache and abnormal behaviour. He had been fumigating the previous days. Most relevant blood tests revealed haemoglobin of 70 g/L, platelets of 11 x 109/L, LDH of 1130 U/L and total bilirubin of 3.1 mg/dl with an indirect bilirubin of 2.3 mg/dl. Peripheral blood smear showed 7 schistocytes per high-power field. Plasma ADAMTS 13 level was < 0.5% with positive (28 units, normal value <15) anti-ADAMTS 13 antibodies. The patient was admitted to the Intensive Care Unit and daily plasma exchange along with parenteral steroids (methylprednisolone 2 mg/Kg/d) was promptly initiated. Platelet recovery (159x109/L), a reduction in LDH level (234 UI/L) and normalization of bilirubin levels were achieved, with slight improvement in his neurologic impairment. However, on the sixth day of the same therapeutic regimen platelet count dropped to 17x109/L, bilirubin raised to 2.9 mg/dl and LDH to 489 UI/L. Rituximab (375 mg/m2) and high dose methylprednisolone (1 g/d for 3 days) were administered without response. On the twelfth day twice-daily plasma exchanges and high dose NAC (75 mg/Kg/bid for 10 days, after each plasma exchange session) were started. Starting the following day, a quick recovery of platelet counts, LDH and bilirubin levels as well of his consciousness were observed and completed in three days. On the 14th day, daily plasma exchange was reinstated, and the 16th days every other day plasma exchange sessions were scheduled. On the 19th day a new ADAMTS 13 determination revealed normalization of activity and anti ADAMTS 13 antibodies (51% and 1.7, respectively). A brain magnetic resonance imaging showed multiple ischemic subcortical lesions of sub-acute vascular origin. Two infections subsequently treated were documented, one linked to the plasma exchange catheter (Staphilococcus epidermidis) and a second related to the urinary catheter (Klebsiella pneumoniae). Due to the impressive clinical and analytical response, NAC was continued at a 600 mg/bid orally. On the 27th day steroid tapering was begun. The patient completed four doses of weekly rituximab and was finally discharged after 37 days of treatment with normal peripheral blood counts and no clinical symptoms. NAC was maintained at a daily oral dose of 600 mg.

Almost 100 years have passed since the first description of a fatal thrombotic microangiopathy by Moschcowitz [15] . Since then two major discoveries have improved our knowledge of the TTP pathogenesis: the role of the prothrombotic ultra-large vWF multimers [16] and the deficiency of the vWF-cleaving metalloprotease ADAMTS 13 [1]. In acquired TTP this ADAMTS 13 deficiency is due to the presence of anti-ADAMTS 13 antibodies [3]. Plasma exchange allows ADAMTS 13 repletion and removal of anti-ADAMTS 13 antibodies, leading to transform the fatal prognosis of TTP to survival rates of 80 to 90% [6].

As a consequence of the appearance of anti-ADAMTS 13 antibodies, TTP is nowadays considered an autoimmune disorder. Therefore, immunosuppressive therapies such as steroids and rituximab, along with plasma exchange, have been added to the therapeutic management [5]. The decrease in anti-ADAMTS 13-antibody production may be observed after one week of high-dose corticosteroids or two to four weeks of rituximab [7]. However, plasma exchange, steroids and rituximab may not be effective enough to control the disease.

Although TTP tends to fluctuate in its severity, refractory acquired TTP, defined by absence of platelet count doubling from baseline after 4 days of standard treatment, has a very bad prognosis and there is no consensus concerning its management [5, 7]. Twice-daily plasma exchange sessions and high doses of intravenous steroids are regular strategies for refractory acquired TTP. However, new drugs including cyclophosphamide, vincristine, cyclosporine A, bortezomib, caplacizumab or recombinant ADAMTS 13 are often needed. In this scenario, N-acetylcysteine, a mucolytic agent that reduces mucin multimers and, similarly, ultra-large vWF multimers, may be a promising agent. Chen and colleagues demonstrated how NAC, in a concentration-dependent manner in human plasma and mice, reduces the intrachain disulfide bond encompassing the platelet-binding vWFA1 domain and, then, intersubunit disulfide bonds to form smaller vWF multimers. Moreover, NAC led to the rapid resolution of thrombi in mesenteric venules in ADAMTS 13-deficient mice [13]. Recently, Tersteeg and colleagues, using mice and baboon models, demonstrated that high NAC doses (400 mg/Kg) without concurrent plasma exchange and immunosuppressive therapy were able to reduce circulating ultra-large vWF multimers but were not sufficient to resolve TTP signs, as NAC alone did not break down pre-existing vWF-rich thrombus. However, NAC was capable of preventing thrombosis as a result of its potent antioxidant effect, its free radical-scavenging properties and its reduction of ultra-large vWF multimers [17].

In our case, NAC was chosen before other immunosuppressors or chemotherapy agent due to his better safety profile. Concerning the dose of NAC and the length of therapy, Li and colleagues firstly reported a dose of 150 mg/kg/d i.e. for 10 days, based on recommendations for acetaminophen toxicity. They completed the first NAC infusion over 1 hour, and subsequent doses were infused over 17 hours after plasma exchange [14]. As our patient was placed on twice-daily plasma exchange, we decided to divide the total dose of NAC in two, so an 8-hour-infusion of 75 mg/Kg/bid for 10 days was administered between plasma exchange sessions. No side effects were observed and an impressive clinical and analytical recovery was quickly achieved. As 40% of TTP patients experience relapse [18] and NAC has been proved to prevent thrombosis [17] .we speculate with the possibility of preventing new episodes with a maintenance treatment. Therefore, after having completed the 10 days of high dose NAC, the patient initiated oral 600 mg/bid of NAC, also very well tolerated. The patient was finally discharged on 600 mg of NAC, in a daily basis. After three months of follow up he continues in remission. We are well aware that more time and further studies are needed to confirm this hypothesis.

Since the first patient successfully treated by Li and colleagues only five patients have been reported achieving good responses following treatment with NAC at the same daily dose, with higher doses (300 mg/kg/d) or shorter length, 4 to 7 days [19,20]. A transient response was described in one patient with a lower NAC dose (bolus of 150 mg/kg followed by 50 mg/kg/d) [21, 22]. Consistent with the fact those high doses are needed in combination with other treatments. Another patient presented a mild response with high NAC doses but with an intermittent administration regimen (on days 21-24, 26-29 and 31) [23]. A failure, at an unspecified dose, has also been reported in a case with a probable concomitant diagnosis of atypical haemolytic syndrome, due to the presence of renal failure and complement involvement [24]. A three-patient pilot study with NAC and plasma exchange for TTP has been completed but not published (NCT01808521).

No analysis of vWF multimers was performed in this case. Therefore, no reduction in ultra-large vWF multimers after the NAC treatment could be demonstrated, as was described by Chen et al [13]. The concurrence of twice daily plasma exchange, weekly rituximab and steroids explains the 51% activity of ADAMTS 13 observed on the 19th day of treatment, due to removal of ADAMTS13 inhibitors, replenishment of the missing ADAMTS13 and blockade of anti-ADAMTS13 antibodies production. However, starting the following day of NAC treatment, a quick recovery of platelet counts, LDH and bilirubin levels as well of the consciousness were observed and completed in three days at the Intensive Care Unit. This quick response is similar to previous NAC-treated cases reported [14,19,20] and suggests the benefit of NAC in refractory acquired TTP patients, either as a potent antioxidant or as an agent able to reduce ultra-large wWF multimers.

Although a potential increased risk for bleeding associated with the use of NAC and the presence of severe thrombocytopenia has been suggested, no evidence of clinical bleeding was observed in our case nor in the previously reported. Tolerance was excellent and a quick recovery was soon observed. Therefore, due to its wide availability, low cost and safety profile we consider that NAC, a potent anti-oxidant with activity against ultra-large vWF multimers, may be a useful supplementary therapy along with plasma exchange and immunosuppressive therapy for refractory TTP patients before the use of more aggressive agents. We provide first evidence of the possibility of combining twice-daily plasma exchange with a split high dose of NAC. Further studies are warranted to confirm the superiority of high dose NAC in combination with plasma exchange, steroids and rituximab for TTP patients as first-line therapy or the role of NAC at low doses in preventing relapses. 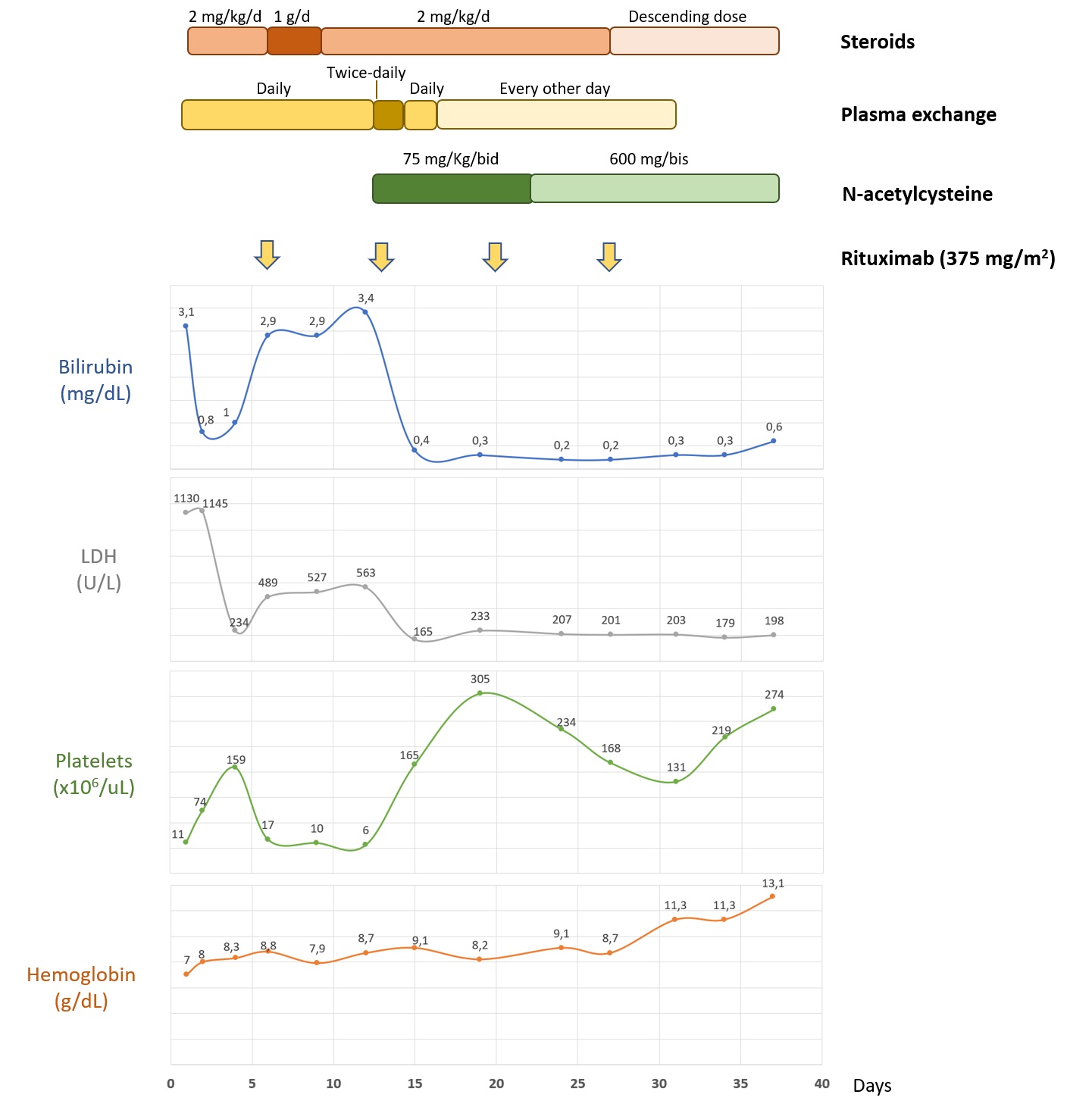