Data mining is the term used to describe the process of extracting value from a database. By using Neural networks information can be extracted from the databases. This review summarizes how Artificial Neuronal Networks are used as data mining tool in drug design

ANN techniques are the mathematical models which functions similar to human brain. All ANN methods consist of “neurons” (“hidden units”) in their architecture [3]. Processing Element (PE) is the artificial analogue of biological neuron. A number of PEs (ten to thousands) are organized into groups called layers. There are three types of layers-Input, hidden and Output layer .The input layer is one which collects the information obtained from the surrounding and the output layer then generates a response to a given input . The layers between the input and output layers are called hidden layers. PEs in hidden layers is joined with all the PEs in the input and output layers as shown in figure [1]

Based on literature survey the information of all the available numerous drugs under specific categories which have given significant results in the treatment of diseases and disorders are collected and are used for training the neural networks which will be further used for generating output for the test set of compounds.

Initially, a compound set of 313 AChE inhibitors was collected from literature. Descriptors were selected by manually dividing the compound set into a training set and a test set (1:3, respectively.). Then the whole dataset together with the previously determined descriptors was used for training models for prediction of activity, here counter propagation neural networks and novelty detection method were used. Later after model validation, an external dataset - the natural products database DIOS – was screened. The resulting hit lists contained basic, neutral, and acidic compounds. Because of the aromatic environment of the AChE inhibitor binding site, binding of neutral or basic compounds is more favorable than binding of acidic ones. So accordingly Virtual hits were filtered in order to remove acidic compounds and then docked to confirm their potential to fit into the AChE active site. From the resulting hit list, promising natural compounds were selected for biological testing. A graphical workflow is given in Figure (2) [4].

From the available sources i.e literature and other chemical databases like Pub Chem., Pubchem Bioassay and ZINC, etc A Antimicrobial drug database (AMDD) was created. AMDD current version consists of 2900 antibacterial and 1200 antifungal compounds. The details of molecules are given with the following properties such as description, target, format, bioassay, molecular weight, hydrogen bond donor, hydrogen bond acceptor and rotatable bond. These available anti-microbial agents, provides useful information and facilitate the virtual screening process, by saving time and overcoming difficulties in selecting speciﬁc type of inhibitors for the speciﬁc targets. The information regarding all those compounds are freely available [5]. The information obtained from this database can be utilized as a training set in neural network.

In order to find more effective anticancer drugs, the U.S. National Cancer Institute (NCI) screens a large number of compounds in vitro against 60 human cancer cell lines from different organs of origin. Various statistical and artificial intelligence methods including neural network modelling can be used to analyse this large activity database. Mining the database can provide useful information:  (a) for the development of anticancer drugs; (b) for a better understanding of the molecular pharmacology of cancer; and (c) for improvement of the drug discovery process [6].

These databases give the knowledge related to the physicochemical property profiles of the drugs, their targets ,mechanism of action, Pharmacophores, descriptors, Pharmacokinetic properties (ADMET).

The inability to understand and control the ADMET properties of molecules is an important reason why many candidate drugs fail late in the development pathway. These failures are expensive and they contribute to the diminishing efficiency of the pharmaceutical industry. In silicon models of ADMET properties allow these properties to be considered at an early, less costly stage, and should reduce the number of late-stage development candidates which fail. Neural network approach provides useful solutions to this problem [8]. Kohonen Artificial neural network and Counter Propagation Neural network is used in Molecular structure –Toxicity studies [9].

The neural networks are trained by utilizing these databases and are prepared for giving solutions/output for new test sets of compounds. If a new set of compounds (test set) is given to the neural network then it will generate the output based on the data contained in the system which was previously used for training the neural network system .Suppose a compound in a test set is having a structural similarity to the ant tubercular agents then the neural network will predict its QSAR data accordingly Table 1 [10].

Analysis of the similarity and diversity of combinatorial libraries

Kohonen Mapping-Kohonen neural networks have been used to show that the combinatorial libraries derived from 1 and 2 are very similar, whereas those obtained with 3 are distinctly different. The depicted kohonen map indicates that the libraries from 1 and 2 are so similar that they need not both be synthesized for screening figure 3.R1 –R4 are one of 18 possible aminoacid residues [12]. 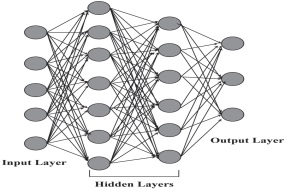 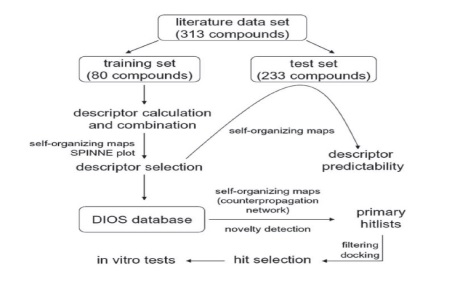 Figure 3: Analysis of the similarity and diversity of combinatorial libraries

By using kohonen two-dimensional maps of molecular surface properties can be generated and used for the comparision of set of molecules [13].

Kohonen neural network/SOM is used in drug discovery. To demonstrate the utility of the technique SOM method has been applied to several series of compounds. A classic set of 31 steroids are used for validating novel QSAR and from the resulting kohonen maps it was a simple task to classify whether a molecule was active or inactive. Potentially these maps could be used to search databases for new lead structures that possess the biological activity of interest [14].

It is done by using kohonen neural network. This network performs a nonlinear mapping of a high dimensionality data space transforming it in a low dimensional space. The SOM technique is employed to cluster and extrapolate the data set keeping the original topology [3].

To find out active compounds from a large dataset, ANN is trained using High throughput screening (HTS) data. The HTS data acquired from methionine amino peptidases inhibition activity considered of library of 43,347 compounds and the ratio of active to nonactive compounds, R(A/N) was 0.0321. Back propagation ANNs were trained and validated using principal components derived from the physicochemical features of compounds. The results showed that only 10% of all available compounds were needed for training and validation and the rest of the data set was screened with more than 10 fold gain of original R(A/N) value. Thus, ANN trained with limited HTS data might become useful in recovering active compounds from large datasets [15].

ANN has become efficient tool for modelling and variety of data analysis in drug discovery. Neural networks are powerful data mining tools with a wide range of applications in drug design .Neural networks are used in Predicting HIV Drug Resistance [17]. 93% correct separation of compounds with and without antibacterial activity (in set of 657) is obtained using 34 “inductive QSAR descriptors”. The elaborated QSAR model based on the Artificial Neural Networks approach has been extensively validated and has confidently assigned antibacterial character to a number of trial antibiotics from the literature [18]. Overviewed visualization methods based on nonlinear dimensionality reduction and highlighted applications in drug discovery with emphasis on ANN technique [19]. Demonstrated importance of quantum chemical calculations in predicting the specificity of tetrahydroisoquinoline derivatives using ANN [20]. Developed ANN model for dopamine receptor subtype (D1 like and D2 like) affinity and selectivity and showed that secondary amines and other nitrogen containing moieties were shown to be important for the D1 like receptor selectivity [21],whereas molecular size, volume and tertiary and quaternary carbons were found to be of significant importance for the D2 like receptor selectivity[2].

Knowledge Miner Self-Organizing Data Mining for your Mac. It works using three advanced self-organizing modeling technologies: Group Method of Data Handling (GMDH Neural Networks), Analog Complexing and Fuzzy Rule Induction. This is the first time that all of these algorithms have been available in one place on any computer platform.

Management Intelligenter Technologien GmbH It is a data mining and clustering software for numerical and textual data. Main product is DataEngine. Interfaces to Lab View and Bridgeview. Data Engine is a software tool for data analysis in which fuzzy rules, fuzzy clustering, neural networks and fuzzy neural systems are offered in combination with mathematics, statistics and signal processing.