Oro-buccal chemical biosensors are important molecular screening sensors with ‘gate-keeper functionality’ to determine the likeliness of passage of ingested compounds to the downstream coupled gastro-intestinal tract in many higher organisms, including animals and humans [1-3] . As such, they fulfil an important chemical barrier function to allow compounds of origins likely to represent molecular building blocks for tissue growth and repair in form of lipid, carbohydrate or protein origins, whether simple or more complexed [4-6]. As such, the sensor curves regarding sensitivity and steepness of screened stimuli must cover a wide range of organic compound compositions which is ensured by a concerted action of several chemo-sensor types for distinct chemical stimuli (i.e. acid, salt, sweet, bitter, umami) [7-9]. Psychotropic studies have established links for higher brain function qualities related to oro-buccal chemo-sensor readouts [10, 11]. As such, there is a growing interest to find optimized organo-compound blended systems to differentially and holistically activate those biosensors. In processing various of such compounds, manual mechanical engineering principles are usually applied in form of cutting/chopping/mincing methodologies as well as mixture approaches, e.g. spinning or tumbling of blends [12,13]. The resulting outcome in terms of preserving texture of the very soft components needs to be well balanced in order to ensure adequate processing of less soft or more hydrophobic surface components, e.g. as given by polytetrafluoroethylene (PTFE). In order to facilitate blending, depending on the surface texture and surface geometry, either water, solutes or lipid molecular surface interaction enhancers are usually added as stabilizers. In this report, we provide a detailed description of a blended multi-particulate system made of compressed fermented lactation products and nightshade-cropped volumetric cubes and bitterness-enhancing rocket leaf planar components, which were gently manually tumbled and doped with unsaturated oil fluid additions (e.g. oil of Olea europaea) as well as high viscosity excretion product of Apis mellifera. Test subject ingestion and taste sensation evaluation confirmed a high level of higher brain sensory function stimulation.

Full-bodied yellowish nightshade crops aka Hokkaido pumpkin (Cucurbita maxima Duchesne ssp.), compressed fermented        lactating           sheep   (Ovis aries)      breast   protein-containing homogenate (aka as feta cheese from sheep milk) and green planar bitter leaf systems of high fiber content (aka as rocket leaf) comprised the major constituents. All material was obtained from the local groceries market and were of ingestion grade for humans (Homo sapiens sp.) and within the approved storage window as marked by the label information provided by the manufacturer. In addition, brain-shaped drupaceous seed of family genus Juglandaceae grown from arbore origin (aka walnuts), low viscosity unsaturated fatty-acid enriched lipid composition of olive arbore (Olea europaea) origin and obtained bottled after cold-pressed extraction (aka olive oil), Apis mellifera (aka as honey bee)-secreted multi-polyol and complexed sugar mixture (aka honey) and balsamic acetic acid were also used during the downstream processing procedure. The pressed protein complex and the nightshade crop were mechanically sliced and cut into cubes of ~1-2 cm edge length us ng a sharp blade of ferro cultro (aka steel knife). The bitter leaf planar material was washed thrice with water and manually shaken dry. While a hydrophobic surface-coated c tai er with high thermal conductivity (i.e. a fried pan) was bedewed with an unsaturated thin oil layer of pressed olive origin and put on a thermos-conductive plate set to heat up the layer, the leaf compounds were arranged along the surface shell of a porcelain plate which also supported the drying procedure. While passively air-drying the leafs thr ugh evaporation at room temperature (ca. 22 °C), the partitioned soft tissue cubes were l ghtly fried and smouldered keeping the heat plate around a temperature of 230 °C for about 10 min to soften the tissue rigidity for easier subsequent dental comminution (Note: members of the Homo sapiens species wearing dentures should put their dentures on before consumption). Together with the also previously cube-cut protein component, the thermally processed nightshade crop cubes were evenly distributed on top of the leaf layer. Then, brain-shaped Juglandaceae seeds manually crunched to a broadly-sized particle distribution and hand-sputtered as the top layer on the composite. As the last step of the added manufacturing process, highly viscous Apis mellifera excretion liquid was poured over the multi-layer composite in thin streaks with a meander- like topography.

The final processed composite was served for oro-buccal ingestion to test subjects gathered together for quality control assessment. The six test subjects from the Homo sapiens species covered age ranges between ~30 and ~70 years and included a female representation of ~20%. All subjects were provided with several plate servings and allowed to manually ingest the composite material ad libitum using metal alloy forks. Chemical oro-buccal biosensor activity and higher neurosensory processing function were assessed by evaluating (i) the amount of ingested portions, (ii) the time required to reach satiety and (iii) a contentedness assessment using a subjective scale ranging from zero (not satisfied at all) to 5 (extremely satisfied). As control to assess oro-buccal biosensor activation enhancement, a subset of test subjects were also presented with equivalently sized portions of the single component green leaf (rocket) only. All data were analysed using Microsoft Excel software and statistical significance was assessed using Fisher’s exact test, one- or two-way ANOVA or Tukey test followed by Bonferroni post-hoc analysis, where appropriate. In addition, the test subjects were examined one day after ingestion and digestion of the final processed composite for possible adverse effects, including nausea, vomiting, diarrhoea or intestinal obstruction.

When presenting the composite product to various test subjects covering a broad range regarding age and gender, it became apparent that the satiety had a markedly higher response rate to the ingested portion number as compared to rather presenting a singular component dish of equivalent amount (wet weight). This is suggestive of a vastly enhanced oro-buccal activation of TRPM5 and PKD2L1 chemical biosensor taste receptors [14] that might have led to a higher ingestion apprehension as indicated also by the larger number of ingested portions for the composite over the singular component (Figure. 1C). It is also interesting to note that the absolute level of satiety was markedly lower in the single component ingestion over the composite. This argues in favour of a premature abortion of the ingestion process in the single component ingestion compatible with not satiety being the stop criterion in the test subjects but rather adverse oro-buccal chemo-sensor activation associated with a dislike of the component. 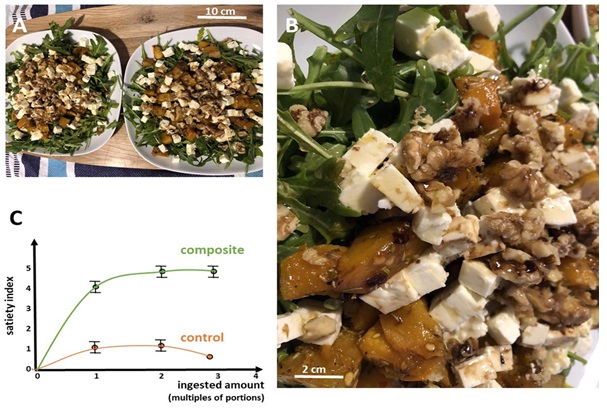 Figure 1: Final composite product of the downstream processing procedure for the given organic compounds to the final Product (A, B). C, satiety index assessed for a maximum of six test subjects as a function of ingested portions of either Composite product (green) or control component (rocket leaf, orange). Note the different scale bars in (A) and (B).

Studies on the downstream processing of organic food components with an assessment of oro-buccal chemo-sensor activation and satiety index assessment are scares in the literature. Regarding fruit inge tion a recent review analysed a round table discussion exploring the contribution of dried fruit to "five a day" fruit and vegetable intake and fiber intake and whether dried fruits have similar equivalence with fresh in terms of dietary advice, advice on snacking in relation to dental health and appetite control. The discussion also involved informing the public about different types of dried fruits and avoiding consumer confusion, and future research requirements [15]. Recent studies on the use of non- nutritive sweeteners (NNS) and normal caloric sweeteners have found a differential impact on subsequent brain responses to visual food cues and energy intake [16]. Variations were speculated to reflect an initial stage of adaptation to taste-calorie uncoupling, indicative of longer-term consequences of repeated NNS consumption on food intake behaviour [16]. In our approach, no NNS were involved thus; we can assume a pure organic preparation of natural energy provision. Thus, the concept of visual cues affecting appetite, energy intake and satiety is appealing and is also corroborated by the fact that the less visually appealing single component green leaf ingestion was associated with a lower energy intake already saturating satiety levels at fewer portions. It seems likely that the fermented compressed milk component (aka cheese) in our homogenate may be a prime determinant of satiety and energy intake in our composite. It is interesting to note that a study comparing egg and cottage cheese ingestion described similar satiating effects despite different postprandial kinetics [17]. Apart from this not much is known about the influence of nightshade-crop components in setting satiety. Therefore, our study may represent an important seeding point for future follow-up studies focusing on the Investigation of tube-crop components in more detail. Likewise, population-specific differences will also have to be investigated in more detail, since, e.g., pumpkin was found to be more consumed by Australians than Italians [18].