We report a 13 year old girl with thyrotoxicosis due to thyroiditis with positive anti thyroid antibodies presenting with complete heart block followed by dynamic ECG changes and normalization of the cardiac rhythm following control of thyrotoxicosis. Although tachyarrthymias are common in thyrotoxicosis, rarely they can present with bradyarrthymias and need aggressive control of thyrotoxic state. Symptomatic control with beta blockers may be devastating and early recognition and treatment improves morbidity and mortality and prevents unnecessary implantation of pacemakers.

Thirteen year old school girl from Kandy presented to Teaching Hospital of Peradeniya with a history of acute onset palpitations for two days duration. She was apparently well one week back when she developed a high grade fever.  Over the days she was increasingly getting irritable and tired. And noticed increased sweating and increased appetite. No history is suggestive of other autoimmune conditions. Her father was diagnosed to have thyrotoxicosis and is on carbimazole.

On examination she was lying comfortable on the bed. Temperature was 103.6 degree Celsius.  She was not pale. Thyroid gland was diffusely enlarged. No evidence of dysthyroid eye disease. No ankle edema. Heart rate was 140 per minute. Respiratory rate was 24 per minutes. Abdominal and neurological examinations were normal.

She had dynamic ECG changes during the thyrotoxic period. Initial ECGs showed sinus tachycardia with a rate around 150 beats per minute. On day 2 of her admission she developed complete heart block which was narrow complex (figure 1). On day 4 of illness it was reverted back to the sinus rhythm and she was having T inversions from V1 to V4. On day 9 of illness ECG showed intermittent first degree AV nodal block. On day 10, He was in sinus rhythm with ST segment depressions in V1 to V6. Day 13 ECG showed ST segment depressions in lead 11, 111 and aVF and V2 to V6 with a ST segment elevation in aVR (figure 2).  2D echocardiogram showed and Ejection fraction of 60% with good LV function. Serum Potassium level was within normal limits. Troponin I titer was <0.2000 (normal <1.0) CK-MB 17U/L. 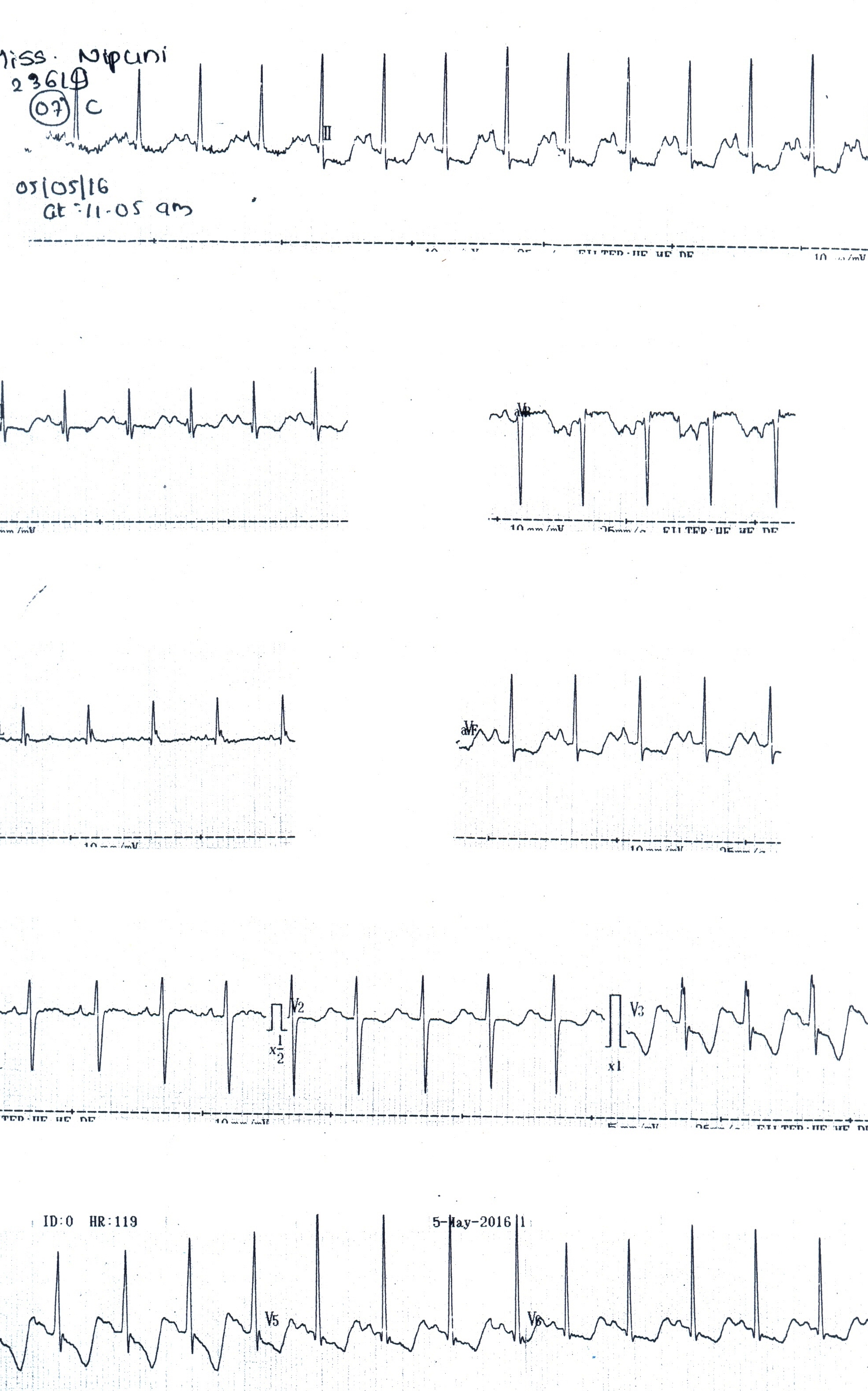 With the dynamic ECG changes specialized electrocardio-physiology opinion was sought and prophylthiouracil was added while continuing carbimazole and holter study was planned. On Day 9 holter showed intermittent first degree heart block with occasional wencheback (mobitz type1). It was concluded that wide spread ECG changes probably due to depolarizing abnormality due to persistent tachycardia in the thyrotoxic crisis. Patient was started in frusemide and spironalactone and symptomatology improved. Prophylthiouracil was stopped and carbimazole continued on discharge.

She was regularly followed up in the medical clinic as outpatient. Thyroid functions gradually normalized over 3 months and carbimazole was tailed off. With the normalization of thyroid functions ECG reverted back to normal sinus rhythm (figure 3). 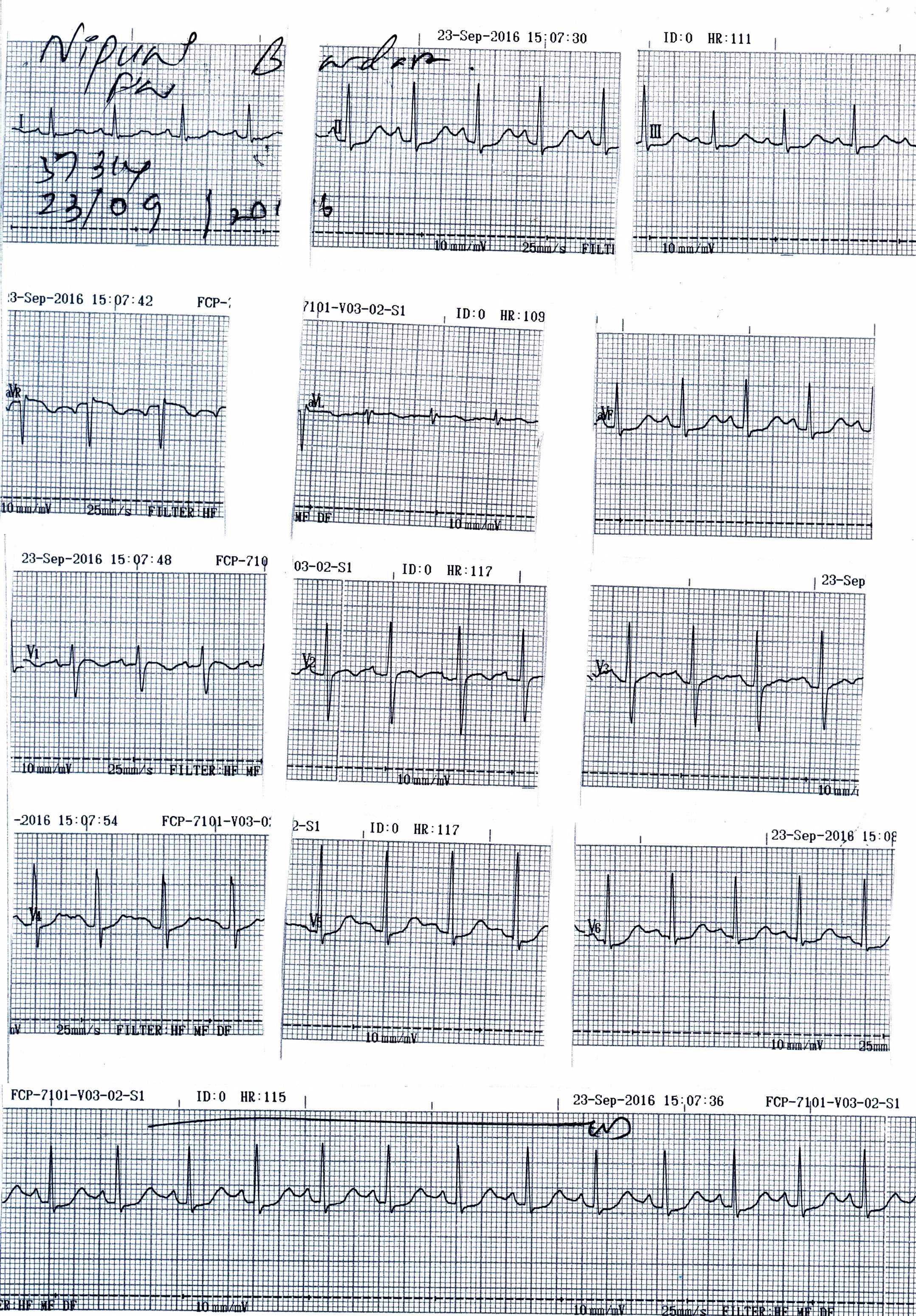 Hashimoto thyroiditis (HT) is an important condition in the spectrum  of autoimmune thyroid diseases. In addition to the classic form, several other clinico-pathologic entities are now included under the term HT which includes fibrous variant, IgG4-related variant, juvenile form, Hashitoxicosis, and painless thyroiditis (sporadic or post-partum). By strict criteria HT is a pathological diagnosis in which there is infiltration of hematopoietic mononuclear cells, mainly lymphocytes, in the interstitium among the thyroid follicles. Most HT forms are chronic and typically present with symptoms and signs of hypothyroidism, although at presentation patients can be euthyroid or even hyperthyroid. The diagnosis of HT relies on the demonstration of circulating antibodies to thyroid antigens (mainly thyroperoxidase and thyroglobulin) and reduced echogenicity on ultrasound scan in a patient with proper clinical features and can be confirmed by typical histology [1]

ECG changes in thyrotoxicosis are common and it is principally related to the increased activity of sympathetic nervous system and simulating effect on the myocardium. Atrial tissue is very sensitive to thyroxin and atrial tachyarrythmias are very common. Thyrotoxicosis can soley present with sinus tachycardia or atrial fibrillation. Supraventricualr tachycardia, premature atrial complexes, multifocal atrial tachycardia and atrial fibrillation are supraventicular arrhythmias that can be seen in thyrotoxic subjects. Non specific ST and T waves changes and ventricular ectopics are reported. High left ventricular voltage without left ventricular strain can be seen. Bradyarrythmia is an uncommon presentation in thyrotoxicosis[2]. In this case we describe a patient with thyroiditis presented with thyrotoxicosis who had evidence of cardiac involvement in electrocardiography (ECG) including complete heart block.

Several postmortem studies done on thyrotoxic patients who had sudden cardiac deaths revelaed interstitial inflammation of the AV node, the bundle of His which can be correlated with typical ECG changes of hyperthyroidism [5]. Shirani J et al reported dilated ventricles, myocyte hypertrophy, edema, interstitial and perivascualr fibrosis, cellular infiltration and myocyte necrosis in narcolepsy in patients with fatal hyperthyroidism [6].

The index case was thyrotoxic on admission and had anti-thyroid antibodies including antithyroid thyroglobulin antibodies and thyroperoxidase (microsomal) antibodies. Whether these antibodies can directly attack the conducting system of the heart is not known. But pathologically similar inflammatory process was noted in around the conduction system and thyroid gland itself. There are antibodies that care well known and reported to attack the conduction system such as anti Ro/SSA and anti La/SSB[7]. It can be postulated that similar mechanism can operate with the anti-thyroid antibodies. Direct effect of excess thyroid hormone on the conducting system is also a possibility

Thyrotoxicosis can have serious consequences on cardiovascular system. It is important for the physician to be aware of bradyarrthythmias that can present with thyrotoxic crises. Although it is rare, thyrotoxic status needs to be aggressively controlled in a case of bradyarrthymia.  As in our patient single antithyroid drug may not be sufficient to control thyrotoxicosis and may need multiple drugs in high doses such as carbimazole and propylthiouracil. Early aggressive control of thyrotoxicosis with the use of propylthiouracil may prevent unnecessary implantation of pacemakers in these patients. Devastating consequences will be there if the presence of bradyarrthymia is not appreciated and symptomatic thyrotoxicosis treated with intravenous or oral beta blockers or rate limiting calcium channel blockers.

The authors declare that they have no competing interests.

Written informed consent was obtained from the patient for publication of this case report.