Introduction: gallbladder’s metastasis of renal cell carcinoma (RCC) is uncommon. It represents less than 1% of all metastatic sites of RCC. This disease was considered exclusive to clear cells type. Indeed, only 52 cases were reported in the literature, all except one were confirmed to be clear cells renal carcinoma (CC RCC), the remaining being calcified as renal cell carcinoma “type not specified”.

Case’s presentation: in this paper, we report a first case, to our knowledge, of a synchronous gallbladder’s metastasis of an aggressive tubule-papillary renal cell carcinoma type 2. It’s about an 81-year-old Moroccan woman who suffered from right low back pain and hematuria. She was admitted to our institute for a right kidney’s tumor with a gallbladder’s lithiasis revealed at the computed tomography scan. The final diagnosis was established after histological and immunohistochemical study of the radical nephrectomy and the cholecystectmy.

Conclusion: greater attention should be given to any galldbladder’s lesion associated to any histological type of renal cell carcinoma, to exclude the possibility of metastasis which often asymptomatic and whose simple cholecystectomy improves survival.

Metastasis disease of RCC is common. One third of newly diagnosed cases will have synchronous metastatic disease at presentation. The most common sites of metastasis of RCC are lung, bone, liver, adrenal gland, brain and contralateral kidney. Gallbladder involvement is reported in less than 1%. Only 52 cases were reported in the literature. The CCRCC type was responsible for practically all cases. We report a case of synchronous gallbladder’s metastasis of renal cell carcinoma affecting an old woman adding an additional case of this rare pathology to the literature. In addition, we describe the first case, to our knowledge, of gallbladder’s metastasis of tubule-papillary renal cell carcinoma (TPRCC) type 2. TPRCC comprises approximately 11% to 20% of RCC. It characterized by malignant epithelial cells forming varying proportions of papillae and tubules. The type 2 tumor cells are of higher nuclear grade and are typically associated with a worse prognosis.

Trough this presentation we discuss the clinico-pathologic features of this rare entity.

An 81-year-old Moroccan woman who suffered from right low back pain for 3 months with hematuria. She was admitted to our institute with anemia, Hb at 10g/dl, craetinine at 7,8 mg/l, and urea at 0,23g/l. Abdominal computed tomography Scan showed a 8cm heterogenous mass occupying the upper pole of right kidney with an hilar lymph node enlargement. Simultaneously, CTScan revealed a presumed gallstone in gallbladder (Figure 1). Thus, an open radical nephrectomy , adrenalectomy and cholecystectomy were arranged.

In the pathological examination, the surgical specimen showed a polar and med-renal yellow lesion (8cm in diameter). It was well circompscribed with pseudocapsule formation, hemorrhage and necrosis. We discovered, also, a whitish hilar lymph node (1cm in diameter) without invasion of renal vein, adrenal gland or perinephric fat.

Unlike the scan image, the cholecystectomy specimen showed a 3mm submucosal polyp without gallstone. Cut surface of the polyp was homogenous, yellow-than and soft.

Microscopically, the renal tumor was massively necrotic and it was composed of papillae covered by a pseudostaratified layer of epithelial cells with significantly higher nuclear grade. Stromal foamy macrophages and psammoma bodies were present (Figure 2C). A solid component, composed of solid sheets of cells with an ill-defined tubular pattern, has been found. It represented 5% of the tumor (Figure 2C).

Figure 2: Tubulo-apillary RCC, (A) microscopically, the renal tumor is composed of papillae covered by a pseudostaratified layer of epithelial cells with Stromal foamy macrophages in fibrovascular cores (arrow). (B) We note a significantly higher nuclear grade. (C) The tumor contains a solid component which is composed of solid sheets of cells with an ill-defined tubular pattern.

The hilar lymph node was metastatic. The gallbladder’s polyp corresponded to the same solid pattern of the renal tumor. It was confined to the muscular with no extension into serosa (Figure 3). In immunohistochemical investigation, the tumor cells were found to be immunoreactive for CD10, Cytokeratin7 and Vimentin (Figure 3). 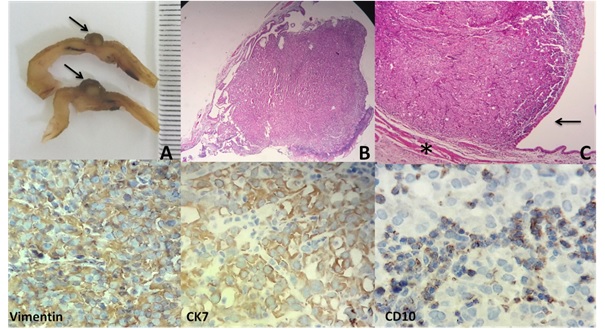 Figure 3: Gallblader’s metastasis of Tubulo-apillary RCC, (A) grossly, it corresponds to a submucosal polyp with a yellow-than cut surface. (B) Microscopically the polyp shows the same solid pattern of the renal tumor (arrow). (6) It is confined to the muscular with no extension into serosa *. In immunohistochemical investigation, the tumor cells are immunoreactive for Vimentin, Cytokeratin7 and CD10.

These pathological features allowed the diagnosis of tubule-papillary renal cell carcinoma type 2 with solid component, limited to the right kidney with a single regional lymph node’s metastasis and distant metastasis in gallbladder. The tumor was classified as pT2N1M1.

Metastasis to the gallbladder is rare and found by chance in autopsy in most cases. Its rarity and clinical similarity to benign gallbladder diseases can make correct diagnosis difficult in a clinical situation. In such cases, the lesions are usually asymptomatic and detected primarily at imaging or autopsy [1].

The most common metastatic tumors to the gallbladder are metastatic melanoma, metastatic carcinoma from stomach, pancreas, ovary, bile ducts, colon, and breast [2].

Gallbladder’s metastasis of renal cell carcinoma (RCC) is uncommon. It represents less than 1% of all metastatic sites of RCC [2]. This cancer is characterized by its great propensity to metastasize synchronously or metachronously to various anatomic sites. RCCs most commonly metastasize hematogenously via the vena cava primarily to the lung, although lymphatic metastases also occur. Retrograde metastasis along the paravertebral veins, the vena testicularis, vena ovarii, intra-renal veins, or along the ureter may also occur [2; 3].

To our knowledge, only 52 cases of gallbladder’s metastasis of RCC were reported in the English literature [3]. In such cases, the authors demonstrated a predominance of male patients (67.3 %), with a median age at 62.5 years old [4]. In most of the cases, the diagnosis was made incidentally during a radiographic exam for staging or on follow-up (74.4 %) [4].

When symptomatic, the majority of cases presented with acute or chronic biliary symptoms

Gallbladder lesion was persistently polypoid/pedunculated and intraluminal in 92 % of cases. The mean size was 25 mm (range 8–75). Mucosal invasion was evident in 65 %, and gallstones were present in only 15.6 % [4-6].

Of the cases with available pathology of the gallbladder RCC metastasis, all except one were confirmed to be CC RCC, the remaining being classified as RCC “type not specified”. So, gallbladder’s metastasis of RCC was considered exclusive to clear cells type [4; 5].These findings may be explained by the predominant frequency of clear cell RCC in the general population. The small size of cohorts may not have allowed for other histologies to contribute to the total number of metastatic events to the gallbladder [6].

Our case involved a gallbladder’s metastasis of Tubulo-papillary renal cell carcinoma (TPRCC) type 2 with solid component, in an 81-year-old woman with sub mucosal polyp measuring 3mm in diameter, who was diagnosed as gallstone at the CTScan.

Tubulo-papillary RCC comprises 11% to 20% of RCCs [7; 8]. It received little attention as a distinct morphologic entity until 1976. It characterized by malignant epithelial cells forming varying proportions of papillae and tubules. Cytogenetic and molecular studies have reveled distinct findings in TPRCCs that distinguish them from other renal epithelial tumors [7; 8]. The majority of sporadic TPRCCs are characterized by trisom of chromosomes 7 and 17. Approximately 10% of the sporadic TPRCCs have also been reported to show somatic mutation in the c-MET gene. A subtype of RCC with prominent papillary architecture was shown to have translocation t(X; 1) (p11; q21). This translocation results in the fusion of TFE gene on chromosome X to a novel gene, PRCC, on chromosome 1 [7].

Although, the histomorphologic features of TPRCC were not well defined until recently. This fact led difficulties in classifying renal tumors exhibiting papillary or pseudopapillary histology [7].

The mean age of patients with TPRCC ranges from 52 to 66 years, and males are affected slightly more than twice as often as females. There are no presenting signs and symptoms that are unique to TPRCC. The radiologic findings are non specific; however, in the era renal angiography, TPRCC was found to be much more likely than other subtypes to be avascular or hypovascular , and was more exhibit radiologically evident mural calcifications. It is also more likely multifocal and necrotic than other common RCC subtypes [7].

Grossly PRCC is typically well circumscribed, and up than 90% of cases are confined to the renal parenchyma. A thick fibrous pseudocapsule is present in up to two-thirds of cases. The color of the tumor is in great part related to the microscopic findings; tumor containing abundant foamy marrophages is tan to yellow; whereas, those with intratumoral hemorrhage are dark tan to brown. Some lesion may be frankly necrotic [6; 7].

Microscopically, TPRCC is composed of varying proportions of papillary and tubular structures and in some instances contains cysts with papaillary excrescences. Papillae are lined by a single layer of tumor cells that may sometimes appear pseudostratified. The stalks of the papillary structures contain fibrovascular cores, and are commonly infiltrated by variable numbers of macrophages [7].

More than half of TPRCC can exhibit other morphologies including truly solid growth patterns. Solid variants of PRCC consist of tubules or short papillae resembling glomeruli. Necrosis and haemorrrhage is frequently seen and haemosiderin granules may be present in marcophages, stroma and tumor cell cytoplasm [7].

Two morphological types of TPRCC have been described: Type 1 tumors have papillae covered small cells with scanty cytoplasm, arranged in a single layer on the papillary basement membrane. Type 2 tumor cells are often of higher nuclear grade with eosinophilic cytoplasm and pseudostratified nuclai on papillary cores. It exhibit large and spherical nuclei, prominent nucleoli. Sarcomatoide dedifferentiation is seen in aproxymately 5% of PRCC and has been associated with both type 1and 2 tumors [8].

The particularity of subtypeing PRCC is supported by data showing that tumor type is an independent predictor of outcome, with type 1 tumors having significantly better survival than type 2[8].

Survival for patients with gallbladder metastasis may be similar or better when compared to those with common sites of metastatic RCC [9]. Since, the simple cholecystectomy may provide the best survival outcome [5].

Although in our case the lesion was completely resected, the patient had also a metastatic lymph node, she was referred to oncologist for further management.

Preoperative diagnosis of gallbladder metastasis should be considered in patients with a history of RCC [6]. Gallbladder’s metastasis of RCC is no exclusive to clear cells renal carcinoma, tubulo-papillary renal cell carcinoma or other subtype can be associated with disease.

The authors would like to acknowledge the help of surgeons of urologic department of Ibn Sina Hospital, in participating in the patient’s management.

The authors declare that they have no competing interests.