Patients were of both sex, group 1 (intervention) were 36 IBS cases that received routine remedy, jujube powder and yogurt, and group 2 (control) 32 IBS patients were received routine remedy and yogurt for 4 weeks. Intervention was carried out 2 times a day which each time 30 gram jujube powder was added to 150 gr yogurt.  Frequency of digestive symptoms including chronic abdominal pain, stool urgency, and incomplete evacuation were assessed in Likert scale. IBS symptoms were assessed 5 times at the end of each experiment.

The results revealed that, in comparison with intervention group, control group had more stool urgency and C-reactive protein (CRP) level.

The results of this study showed that chronic abdominal pain was not different among two groups, significantly. CRP levels decreased in intervention group after the intervention. Both groups have also showed no significant difference in terms of incomplete evacuation.

Irritable bowel syndrome (IBS) is the most common functional gastrointestinal disorders (FGIDs), which are characterized by chronic and recurrent gastrointestinal (GI) symptoms with ambiguous pathophysiology [1]. IBS can be classified into subgroups depending on the predominant bowel symptoms, namely constipation-predominant (IBS-C), diarrhea-predominant (IBS-D) or alternating between the two (IBS-A) [2, 3] It has been estimated that 5%-10% of the adult population in Asian countries [4] and 10%-20% of the population in developed countries suffer from IBS [5]. In Iran, it has been reported to be 1.1%-25% based on different studies [6]. IBS affects three times as many women as men [7].

The etiology of IBS is still poorly understood, and different pathophysiological mechanisms have been proposed: alterations in gut motility, small-bowel bacterial overgrowth, microscopic inflammation, visceral hypersensitivity and changes related to the brain-gut axis [8]. Research findings indicate IBS patients have more neuroticism and less extraversion and conscientiousness in comparison with the healthy individuals [9]. Therefore, to account for the appearance of this syndrome, a multifactor model which considers the interplay of biological, psychological and social factors needs to be applied [10-12].

IBS is associated with significantly reduced quality of life [13-15] and it is known that many patients seek alternative strategies for symptom relief [16]. Herbal medicines are also used to treat IBS, both in mainstream medicine, and in complementary and alternative medicines from different traditions [17-19]. Jujube (Zizyphus jujuba Mill) is the first of the genus Ziziphus, which is widely consumed in more than 30 countries around the world [20]. Jujube is indigenous in China with more than 4,000 years of history [21], and it is famous for its high nutritional value. Meanwhile, it has been used as traditional medicine treatment such as analeptic, palliative, antibechic in China. Chinese jujube contained 80.86–85.63% carbohydrate, 57.61–77.93% reducing sugar, 0.57–2.79% soluble fiber, 5.24–7.18% insoluble fiber, 4.75–6.86% protein, 0.37–1.02% lipid, 17.38–22.52% moisture and 2.26–3.01% ash. The soluble Chinese sugars of jujube included fructose, glucose, rhamnose, sorbitol and sucrose. Fructose and glucose were identified as the major sugars while sorbitol was present in much lesser amounts. Potassium, phosphorus, calcium and manganese were the major mineral constituent’s in jujube. Iron, sodium, zinc and copper were also detected in appreciable amounts. The contents of vitamin C, thiamine and riboflavin were found to be 192–359, 0.04–0.08 and 0.05–0.09 mg/100 g, respectively. Total phenolic contents ranged from 5.18 to 8.53 mg/g [22]. It could be beneficial for stress and negative emotions, which play an important role in the onset of IBS, is used in clinical practice to treat diarrhea [23] and also showed hypotensive diuretic and anti-inflammatory actions [24]. In accordance with the role of nutrition and increasing IBS in Iranian population and lack of any evidence about jujube powder and IBS in Isfahan population we aimed to determine the effect of jujube powder on digestive symptoms and some inflammatory mediators in a metabolic disease with irritable bowel syndrome.

All patients were handled for 4 weeks. Intervention was 2 times a day which each turn 30 gram jujube powder was added to 150 gr yogurt (i.e. 60 gr jujube powders in 300 gr yogurt per day). Placebo was a similar powder based on appearance, colour and taste

In the current study, the IBS symptoms were assessed 5 times at the end of each experiment. Data were analysed using Statistical Package for the Social Sciences software (version15.0) (SPSS Inc Chicago, IL).

The results of this study showed that chronic abdominal pain were not different significantly among two groups. Stool urgency had a meaningful difference among taken jujube powder (significant in male and female). Both groups have also showed no significant difference in terms of incomplete evacuation. However it has reported CRP (C-reactive protein) decreased significantly among intervention group (p = 0.04 in male, p = 0.01 in female) at the end of experiment as shown in Table 1. 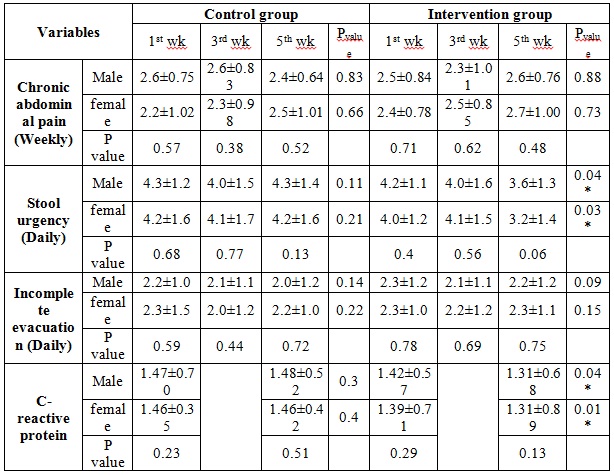 The results of this study showed chronic abdominal pain were not different significantly among two groups. Reported CRP (C-reactive protein) decreased significantly among intervention group at the end of experiment. However, despite considerable limitations, recently several randomized trials comparing the effects of power jujube vs. placebo in IBS showed some interesting positive effects on many gastrointestinal symptoms, especially bloating and flatulence. One of the hypotheses is supported by the clear recognition that IBS may in fact be induced by bacterial gastroenteritis (post infectious IBS) and that qualitative changes in the flora, as well as an immune dysfunction, may be more prevalent in IBS in general. The sustained and large improvement observed in both groups suggests there may be benefit from regular consumption of powdered jujube but does not suggest any additional benefit of the addition of powdered jujube to such products.

A few studies on human have shown that chronic abdominal pain was not different significantly among subject [25]. Treating IBS is important because the symptoms cause substantial impairment in health-related quality of life, lead to increase use of health resources and reduced work productivity [26, 27] Patients with IBS often report worsening of symptoms after meal intake when perceived food intolerance in subjects with irritable bowel syndrome etiology, prevalence and consequences [28, 29]. Altered rectal perception in irritable bowel syndrome is associated with symptom severity [30]. Findings of another study also indicated that IBS patients compared to healthy individuals scored lower in extroversion which is consistent with previous research. IBS is associated with significantly reduced quality of life [31, 32] and it is known that many patients seek alternative strategies for symptom relief. Studies of the treatment of irritable bowel syndrome and other functional gastrointestinal disorders have at times experienced weakness in trial design, power, study execution and data analysis which have made it difficult to determine whether the treatments were truly effective [32, 33]. This is the first study which performed in human study, while there were several limitations in the present study as small sample size and not performing a blinded intervention trial. Performing this trial in a larger sample size and longer intervention period is recommended. After confirming this effect, we can use jujube powder to manage digestive symptoms and C-reactive protein in patients with irritable bowel syndrome

The authors have no conflicts of interest related to this paper.

We wish to thank the participants and their parents.