During pregnancy the most common metabolic complication is diabetes [1].  The American College of Obstetrics and Gynecology (ACOG) has recommended that each pregnancy be tested at 24 – 28 weeks for gestational diabetes by a two-step method (1-hour glucose assessment followed by a 3-hour glucose tolerance test (GTT) when necessary) [2].  The standard of care for those with an elevated 1-hour test involves a 3 hour GTT using either of the two widely accepted criteria (Carpenter/Coustan or National Diabetes Data Group) [2, 3].   Assessment by one of these criteria is important [1, 4].

Traditionally we have tightly controlled our insulin dependent diabetic patient population (Type 1) and hoped that lowering the threshold for the diagnosis of gestational diabetes along with rigorous glycemic control might offer the same salutary results to gestational diabetic women and their babies [5]. In the comparing, the two diagnostic methods of 3hr GTT assessment, we did identify about 20% more patients with the Carpenter/Coustan criteria compared to the National Diabetes Data Group levels [2, 3].  However, there were no differences in patient outcome, so we, like the majority of other institutions, have employed the National Diabetic Data Group Criteria [5].  Regardless of methodology,  one needs to perform this two-step testing as glucose intolerance during pregnancy does impact outcome regardless of the method used [1, 6].  In a retrospective analysis of diabetic ketoacidosis (DKA) complicating pregnancy at our institution, we compared two times periods; 1976-81 and 1986-91.  The incidence DKA fell from 22% to 3% as we identified diabetes at 24-28 weeks and tightly controlled maternal glucose excursions [7].  This as well as other maternal therapy resulted in a significant decrease in stillbirths following DKA from 35% to 10% when comparing the two-time periods.  Similar results have been reported throughout the literature [3, 4, 6].

It is well known that pregnancy is characterized by accelerated starvation and a rise in insulin resistance due to the production of antagonist hormones (human placental lactogen, cortisol, prolactin) [8]. However, these findings occurs in every gestation by the third trimester and by itself does not lead to DKA. Several studies have demonstrated the de novo development of Type 1 diabetes during gestation as the main cause of DKA [7, 8].  In some cases, rapid onset islet-cell failure to varying degrees with resulting DKA is usually related to recent viral infection [9] and there is some evidence that such pancreatic susceptibility may be genetic [10].  Fulminant diabetes mellitus can also result in acute onset hyperglycemic ketoacidosis with a high fetal loss rate in the second half of pregnancy but most of these pregnancies have normal HbA1c levels.  However, these women are almost always of Eurasian descent as it rarely occurs in Caucasian or African American patients [11, 12]. Other investigators point toward of autoimmune factors as the cause of Type I diabetes with DKA and several subtypes have been documented [8, 10].  Regardless of the exact mechanism causing Type 1 diabetes to develop, it is uncommon for DKA to be preceded by a normal glucose tolerance test at 24-28 weeks’ gestation. While it is possible for women with gestational diabetes to develop DKA, the vast majority noted in the literature involves the development of Type 1 diabetes after prior normoglycemia.  In summary, regardless of why patients have rapid islet-cell failure and Type 1 diabetes which results in DKA over hours or up to one or two days, the important aspect is rapidly diagnosing and treating such women appropriately.

The diagnosis of ketoacidosis is based on various signs and symptoms, which along with laboratory findings, lead to the diagnosis of DKA.  Table 1 lists some of the signs and symptoms of DKA but in addition, women are recumbent, weak, and appear extremely ill.  Unfortunately, most of the patient reported symptoms in women who develop DKA are routinely found in women who have normal pregnancies and do not appear ill.  Nausea and vomiting, abdominal discomfort, weakness, increased urination occurs at some time with each normal gestation. In addition, these same symptoms can be associated with urinary tract infection, gastroenteritis, pneumonia or other infections. Overall, the clinicians’ best indication of DKA versus common complaints of pregnancy is the general assessment that patients look very ill.  In contrast, objective signs as tachycardia, dehydration, and hypotension can certainly raise the index of suspicion of DKA in the moribund patient.  Also, cerebral signs such as disorientation or coma, which occur late in the course of  DKA are helpful in the diagnosis. In women with these signs, additional blood testing can be carried out (glucose, sodium, potassium, bicarbonate, ketones, and pH) that will assist in making the diagnosis of DKA.

The management of such women is key for the mother and for the fetus as DKA is a medical emergency during pregnancy.  Table 2 demonstrates the initial treatment of ketoacidosis which requires aggressive fluid resuscitation, intensive treatment with insulin, timely replacement of potassium and sodium bicarbonate infusion (for women whose pH is <7.1).  After initial fluid resuscitation, if hypotension is persistent a central line placement may be necessary to predict crystalloid needs.  Fetal heart monitoring should also be instituted as a non-reassuring fetal tracing may result from maternal acidosis.  Once the patient is stabilized, the tracing usually reverts to Category I or II but if a non-reassuring pattern persists then abdominal delivery should be considered.  While the patient is unstable abdominal delivery should not be attempted but fortunately, the fetus usually tolerates the maternal acidosis until the mother is stabilized.  In our study of DKA, all 18 fetal deaths in the initial period of study occurred before admission compared to one lost prior to stabilization in the 2nd period of our study [7]. 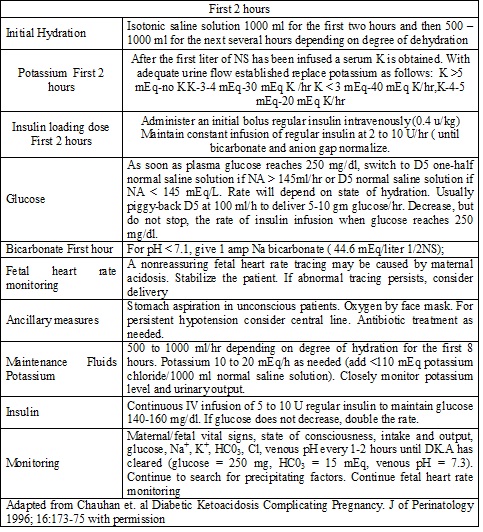 Insulin dosages beginning with of 0.4units/kg of regular insulin combined with one to two liters of isotonic saline administered over the first hour usually begins the stabilization.  One caveat to remember is that less insulin as an initial bolus is given if the initial serum glucose value is low (150-200mg/dl) which occurs in DKA more often if pregnancy is involved.  After the first liter of isotonic saline has been infused, serum potassium is performed and as long as urinary output remains normal, potassium is replaced as noted in Table 2.  A maternal serum pH is obtained and for levels <7.1 sodium bicarbonate infusion is began but additional amounts may be necessary if the pH remains, <7.1.  Additional management includes supplemental oxygen, left lateral position and continuous monitoring of fetal heart rate as well as urinary output.  Continuing management after the first hour is noted on Table 2 but must be adjusted individually.

As previously mentioned, DKA usually follows a new case of Type 1 diabetes as many of the case reports in the literature demonstrate DKA following normal two step testing.  For example, O'shaughnessy et al [13]. Treated a 23-year-old woman at 36 weeks’ gestation complaining of decreased fetal movement in early labor.  During this pregnancy, she had demonstrated a mildly elevated blood 1 hour glucose test (149mg/dl) but noted to have a normal 3 hour GTT (with one elevated level). Ten days prior to her diagnosis of DKA, she had another 1-hour screening test which was normal at 106mg/dl.  On admission, she had a normal pH (7.32) but the blood glucose level was 593mg/dl with positive serum ketones.  She was stabilized using the protocol similar to the one on Table 2 and after a normal labor, she underwent a vacuum assisted vaginal delivery with normal newborn and maternal recovery.  Similarly, Himuro et al [14]. presented a 32-year-old woman with DKA at 28 weeks’ gestation that had a prior normal one hour screening test. Her plasma glucose level was 489mg/dl and her serum ketones were positive.  Her HbA1C was elevated at 13.6%.  The potassium was low at 3.8mEq/l, the pH was normal and while the bicarbonate level was low, her base excess was normal.  With aggressive insulin management and fluid resuscitation as well as potassium replacement, she was discharged and had spontaneous labor at 38 weeks delivering a healthy baby.  The mother continued receiving insulin therapy after delivery.

Both these cases are illustrative of many reports in the literature involving DKA in women who developed Type 1 diabetes after their normal glucose assessments during pregnancy.  In addition, the HbA1C level may be elevated upon presentation in DKA even if during the preceding weeks it was normal. This is because the tremendously elevated blood glucose saturates the receptor sites and rapidly (during the development of DKA), elevate the HbA1C.  On the other hand, even though the patient has DKA, glucose levels may be modestly elevated (150/200mg/dl). Indeed, during pregnancy is one of the times when a patient has DKA but may not have tremendous elevations of the serum glucose. This should be kept in mind during diagnosis and management.

In summary, the incidence of diabetic ketoacidosis has been reduced by testing all patients during pregnancy (rather than only those with risk factors) with a one hour glucose tolerance test and, if abnormal, a three-hour GTT.  This should not only detect gestational diabetes but will also rule out concurrent patients with Type 1 diabetes.  It is this routine testing, which has led the biggest decrement in the number of pregnant patients with diabetic ketoacidosis.  Type 1 diabetes can occur after earlier testing and one should remember that DKA can occur rapidly over a period of hours or days.  When a very ill patient presents with dehydration and other signs (Table 1) of DKA, laboratory assessment should be performed to confirm the diagnosis.  While there are many causes of DKA during pregnancy, almost all are associated with Type 1 diabetes following previously normal glucose testing during gestation.